About the New and Old Bridges in Washington, DC

Click on this link to see a recording of the presentation 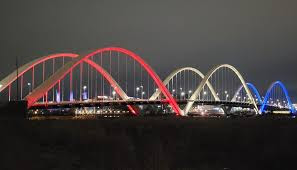 The presentation will be given by LAIGW member Alan Harwood.  Alan is a Principal/President at AECOM.  He has worked on many significant projects in the DC region including Audi Field, the Martin Luther King Memorial, and the Potomac Yard Development Plan, in addition to the Frederick Douglass Memorial Bridge.
KEY PROJECT ELEMENTS

ABOUT THE NEW AND OLD BRIDGES IN WASHINGTON, D.C.

The new and old bridges in Washington, D.C., are vital for carrying traffic from Prince George’s County, Maryland, and other areas of Southern Maryland into the capital. In 1950, the current Frederick Douglass Memorial Bridge (originally referred to as the South Capitol Street Bridge) was built. Each day, it served upwards of 77,000 commuters.The bridge reconstruction project was a valuable opportunity to revitalize the community.

The design of the new Frederick Douglass Memorial Bridge, which is located twenty feet away from the original one, includes three above-deck arches, four pedestrian overlooks, and two piers that will seem to float in the Anacostia waterfront. The new bridge opened in September 2021.   The new bridge has six traffic lanes and improved accommodations for pedestrians and bicycles. The bridge’s design is intended to allow the smoother flow of traffic on both sides of the river and in front of the Air Force base.

Besides serving as a fitting memorial to one of the nation’s greatest civil rights leaders, the finished bridge connects our community and enhances our transportation infrastructure to support continued growth and improvement in the area